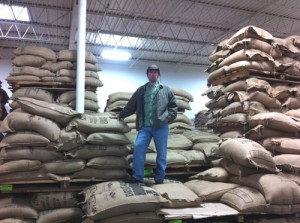 Yesterday, I met my Uncle Jay down at Cafe Imports in Minneapolis. The picture above shows me standing on and among only a small portion of the unroasted beans that they have imported from over 20 countries. It was an impressive site to see the towering stacks of beans all waiting to be roasted.

Speaking of roasting, did you know that green coffee beans smell quite awful? It’s true. While one might think that walking into a warehouse full of coffee beans would be an aromatically exhilarating experience, it is quite the opposite. It isn’t so bad that you can’t stand it or especially foul like a turkey barn, but it is not anything at all like the familiar aroma of the roasted bean.

Another interesting aspect of coffee to consider: Coffee beans come from a plant and changes in the local weather, or any other number of factors mean that each harvest of beans will be just a bit different than the next. So there is always something of an adventure with the new beans – similar to variation that wine producers experience from one year to the next. 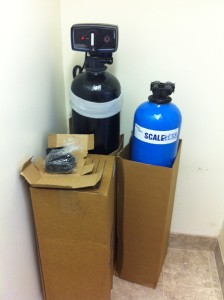 Most aspects of the setup process turned out very much in line with the proposed plan, both in effort and expense. However, one thing that caught me completely by surprise was the water treatment issue. We worked with Chris’ Coffee service out of New York for most of the coffee making equipment. Their experience in this area proved invaluable. I worked solely with Tynnetta, who took a lot of time to help me work through the entire setup. I would recommend her to anyone. In any case, the most complicated and consequently most expensive piece of equipment in a coffee shop is inevitably the espresso machine itself. This is a machine that needs to be cared for to ensure long life and reliability. This means that the water that goes into it must not be full of minerals and particles that are going to collect on the inside and foul the works. Chris Coffee knows this and as a result, Tynnetta included a water softener/filter as part of my quote.

Later, when I went to purchase an ice machine, one of the refrigeration techs was outside having a smoke. While I was waiting for the equipment to be loaded, he commented to me. “Do yourself a favor.” he said. “Filter the water going into the ice machine.” He then went on to explain that most people don’t service their ice machines properly and as a result, they have nothing but trouble. He said if I filter the water and follow the cleaning schedule that it would last for years without problems. At this point, I started thinking about the softner/filter system that I bought from Tynnetta. I wondered if it would be able to handle filtering the water for both machines.

Before I was able to answer that, I came across the idea of adding the “Italian Sodas” to the menu. I wanted a carbonated water dispenser, but there isn’t a big market for just plain soda water. I mean, I love it, but most people in this area don’t. Add to the equation, Torani flavoring syrups, and you now have a unique and refreshing beverage that is perfect for non-coffee drinkers and hot summer days.

So all I needed was the ability to make carbonated water. That should be easy enough right? WRONG! Do-it-yourself soda siphons and “home carbonators” are plentiful – especially on the internet. A system that dispenses carbonated water is virtually impossible to find. To clarify, I mean a system that dispenses ONLY carbonated water. Fountain drink (soda pop) dispensers are everywhere you look as are bar wand systems which also dispense carbonated beverages. After looking even longer, I eventually found a couple home carbonators, but the information on-line was not clear. Would they work in a commercial application?

After weeks of searching, I found some info about carbonation on the website for US Pure Water. It looked like they could help me get ONLY carbonated water with out all the pop flavors.  I called their phone number and got in touch with Michael. This was the phone call that changed my life – at least the part of my life that had to do with water. I could tell immediately that Michael not only could supply me with the equipment I needed, but that he had the experience to help me get the job done right. I had a couple lengthy phone conversations with him over the next few days where we hashed out all the factors involved in my specific situation. We discussed things like the starting quality of the water, the volume of customers that I’d be dealing with, and various options for treating the water.

In the process, I found that the city water here is 22 grains of hardness per gallon. Anything over 10 grains is considered very hard water. This meant certain doom for my ice machine. However, I also was adding a carbonator chiller which Michael had in various capacities and were were installing a new water heater, not to mention the drip coffee maker. It became clear that I needed to treat all the water in the building. The softener filter system I purchased for the espresso machine alone would not be big enough. Thankfully Michael was able to help me plan the perfect system.

With such hard water, the usual solution is a salt water softener. However, I personally do not like soft water. The salt make the water taste and even feel different. I asked Michael about alternatives, and he informed me about Template Assisted Crystallization, which is a process that prevents scale without ion exchange – i.e. no salt! This system doesn’t actually remove the mineral molecules, but prevents them from attaching to each other at the molecular level and becoming scale buildup. Perfect! After this descaling treatment, the water is then put through a carbon filter for further purification.

The end result will be bottled-water-quality water in the entire facility (yes even the toilets). Without the salt-treatment the water will not wreck the equipment and will maintain a crisp taste. To top it all off, you can drink as much of this water as you wish right from the drinking fountain for free! 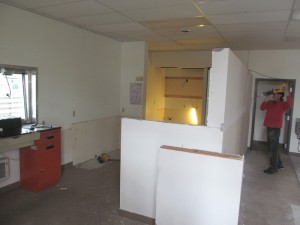 The building modifications are underway at Hats Off Coffee. In order to meet the health departments code, the floor will need to be tiled and the walls covered with fiberglass reinforced panel. The old wooden counters are also being replaced with stainless steel tables. As seen in the picture here, the dividing wall has been lowered. This will be topped with a narrow counter which will be handy for passing things on to customers as well as give the worker behind the counter a full view of the store.

This work  is being done by Peery Construction. Brad has been proven to be easy to work with and his crew is very efficient. We are looking forward to the finished product and can’t wait to get the coffee equipment installed. Before doing so, we’ll need to work on the plumbing. This is without a doubt the biggest challenge as all the plumbing work needs to be submitted for approval with the state.